The Making of ‘Meandering Thru’ Documenting a FKT 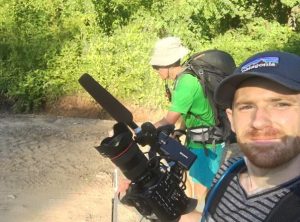 Kevin Morrissey & Everett Brand present The Making of ‘Meandering Thru’ Documenting a FKT;

A behind the scenes look at the forthcoming 2022 feature length documentary “Meandering Thru” about Everett Brandt’s record breaking attempt of the Buckeye Trail. Learn what it takes to make a feature film in the wilderness, run or hike 30 miles a day and get an exclusive look at scenes from Meandering Thru. Kevin Morrissey, the film’s creator, and Everett Brand, the main subject of the film, will discuss their adventure together and what they learned along the way.

Meandering Thru Logline
On the verge of starting a new family, newly wedded Everett Brandt took the summer off of teaching to do one last epic adventure. That adventure; setting a 1400 mile record on Ohio’s Buckeye Trail, will have him face physical, mental and emotional challenges. To complete his solo trek he will need the support and the love of his wife, father, and siblings.

Kevin Morissey
A multi-discipline filmmaker from Cleveland Ohio that tells stories in a variety of ways from live action to animation. His past work has spanned from serving as an editor on a nationally televised show, to a producer on a 3 part documentary miniseries on the Cuyahoga River that aired on Cleveland’s PBS and a multitude of brand films from Fortune 1000 companies. His work has been recognized with several Telly Awards, Emmy nominations and a regional Emmy. Meandering Thru is Kevin’s first feature length film. Kevin is an avid hiker, cyclist, trail runner and environmentalist.

Everett Brandt
An avid hiker and trail runner, who set the Buckeye Trail’s first Fastest Known Time. Everett was a cross country and track runner in high school and discovered the vast network of trails throughout the US after college. When not hiking or volunteering on the trail, Everett is a music teacher in Cleveland and and plays the string bass with the Parma Symphony Orchestra.