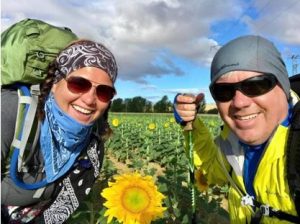 Take an adventure with the Colemans as they share stories and preparation tips from their 2019 Camino from Lisbon, Portugal to Santiago de Compostela. While many are familiar with the Camino de Santiago, most only know of the Camino Frances, the 500-mile route from Saint-Jean-Pied-de-Port to Santiago de Compostella. Rising in popularity, the Camino Portuguese starts in Lisbon and travels nearly 400 miles through some for Portugal’s most beautiful landscapes and cities including Porto, Coimbra, and Tui. The Colemans traveled their Camino by bike, foot, and even a motor-powered canoe!

Brian and Michelle Coleman have traveled to almost all of the United States and parts of Mexico, Canada, and Europe. The Colemans are teachers and adventurers. They have backpacked parts of the Appalachian Trail and North Country Trail, have visited/hiked more than 40 national parks, and completed some bike touring. How did they become “pilgrims?” It all started when they watched “The Way” on the big screen with local hiking friends. They fell in love with the Camino de Santiago and became “pilgrims” as they trekked along “The Way” in Europe. In 2017 they hiked the Camino Frances from St.-Jean-Pied-de-Port, France to Santiago, Spain, to the end of the Earth in Finisterre, Spain. In 2019 they hiked the Camino Portugués from Lisbon, Portugal to Santiago, Spain. In 2022 they will be walking the Via Francigena from Switzerland to Rome.